A downloadable game for Windows, macOS, and Linux

Intimate Codex is an interactive non-linear text explorer that lets you traverse static text from a more first-person perspective. Books, poems, or whatever other texts you feed into it are broken up into passages, and you can move between those passages by typing a particular word you see. After you submit that word, you're brought to a new passage that shares that word.

By providing connections between different passages (and even entirely different works) based on keywords and randomness new narratives and meanings appear that can be vastly different from the original, linear stories.

It is highly recommended that you treat the texts that come with Intimate Codex as a demo and replace them with your own.

The overall experience was inspired by Her Story.

Maybe! There are no goals and no way to win or lose, but the experience is definitely playful.

Can I change What text files that it draws from?

Absolutely! There are several fantastic public domain novels that come preloaded with Intimate Codex, but you are encouraged to swap them out for your own!

All of the text is loaded from data/text folder. Please don't move this folder! The data folder must be in the same place as the app for it to work.

All text files in the data/text folder will be loaded when the application starts, creating a mix-and-match tapestry of passages. You are free to add your own files and remove the ones in there by default, but all files must use the extension ".txt".

Play around with other bodies of text and see what feels fun or meaningful to you.

You can even put this readme in there, although I don't really recommend it.

What if I only want to use one passage instead of having it draw from all of them?

While the app is running, you can load a single text file from that folder by writing

For example, to load macbeth.txt, you would type "loadmacbeth" in the app and press enter.

You will hear a ding if it found a file to load.

You can type "loadall" to load everything in the text folder. This is what the app does by default when it first launches.

Will it work with non-English character sets?

Somewhat. Unfortunately the app does not currently support language that use an entirely non-English character set (such as Arabic or Chinese), but language with accented characters or a few unique glyphs should work. Accented characters may appear without their accents when typing.

Thanks to Ruber (@RuberEaglenest) for pointing out the initial lack of non-English character support and for help testing the new version!

If you are using text in a non-Engligh language, you may want to modify or remove ignore_words.txt in the data folder. It contains a list of common words (in English) that the app will ignore. This will not be relevant for other languages.

If you are having trouble with a specific character, please let me know and I'll do my best to fix it! I only speak English so it is very likely that I messed up in how the app handles some characters.

I'm on Windows and my text file is loading weird

While helping with the language support, Ruber also gave me this tip:

Intimate Code requires UTF-8 encoded text files, but some text files are encoded in ANSI which can cause it to be read in wrong. If you encounter this, you can convert your ANSI file to UTF-8 using Google Drive:

1) Upload the document to Google Drive.
2) Select to Edit It using Google Documents.
3) Download as "Text without format" or "Plain Text".
4) Put the downloaded document in the text folder of Intimate Codex

Can I write my own text to explore?

I hope you do! Larger bodies of text always work better (think 1000 lines versus 100), but even smaller bits of text can be mixed in with the other text files being loaded. All you need to do is make sure that what you write is stored in a .txt file and that you use line breaks to split up lines (basically, just hit the enter key).

What if I don't want it to be full screen?

If you are on windows, and the game shows up as a blank screen, try setting it to be windowed by using "togglefull"

Can I change the font size?

This started as a small text experiment I made for a friend's party in October of 2015. It was created using openFrameworks.

The linux port of this game was done by Jarl Gullberg
https://github.com/Nihlus/

Thank you for making it and sorry it took me so long to post it!

All other sounds were made available under a Creative Commons Non Attribution license.

These are the texts that Intimate Codex uses by default, which can be found in the data/text folder.

Special thanks to Project Gutenberg which has compiled plaintext versions of many public domain works. Some of these works were used for the default text files in Intimate Codex

The code for Intimate Codex is available here: https://github.com/andymasteroffish/IntimateCodex

Very very cool. I love the concept, and the way it was executed. My only complaint is not being able to backspace. :P Great stuff!

For some reason it has trouble displaying? why? I want to play this. Ill try and run it in compatibility mood since I have windows 10, not altered the files in any way.

Hmm. I'm sorry! I'm not sure what that would be. Any luck with compatibility mode? If not can you describe what it does (or doesn't do)?

Well I managed to some how exit full screen which allows me to play the game I tried using compatibility settings, dont make much difference but at least I can use it now, I have even put my own txt files in place

Weird. I'm sorry it was being funky for you. I actually have seen that full screen issue on occasion with openFrameworks, although I'm not sure what causes it. I'm glad you got it to work, and I think it's awesome that you put your own files in!

Hello, I like this "game" so I've made a short let's play video, you can find it here if you'd like to check it out =)

Awesome. Thanks for checking it out!

I'm getting a crash on start due to a missing file called "MSVCP140.dll". It looks like this is part of Microsoft's "Visual C++ Redistributable for Visual Studio 2015", available for free download at <https://www.microsoft.com/en-us/download/details.aspx?id=48145>. Can you confirm (and/or update the game to include this file in the install)?

Thanks for the heads up. I believe that I have run into this issue with other openFrameworks applications on Windows so I would say downloading it is your best bet.

I'll make a note in the readme & install instructions as well. 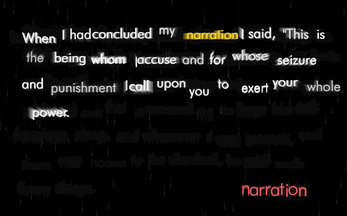 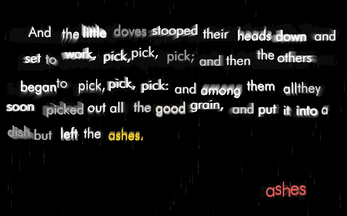 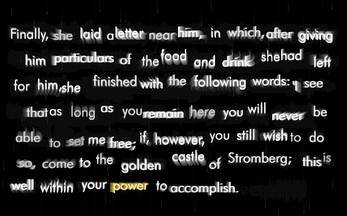